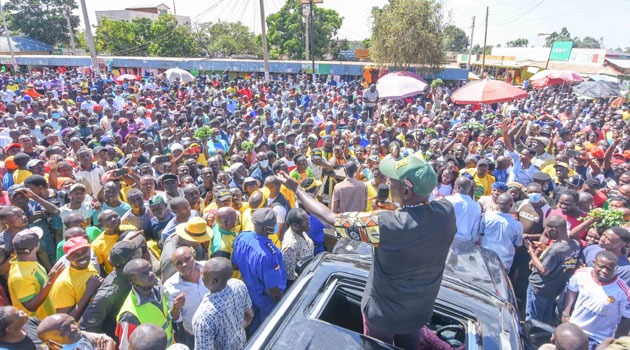 Deputy President William Ruto has urged Kenyans to reject leaders imposed on them.

He said no one should sell fear to Kenyans, saying its voters who have the final decision on matters of leadership. Ruto said those imposing leaders on Kenyans would meet the wrath of voters at the ballot.

Speaking in various stopovers during his tour of Trans Nzoia County on Monday, the Deputy President said Kenyans should be left alone to elect leaders of their choice.

“Some few wealthy individuals recently carried out interviews in Nairobi hotels and declared Odinga as their candidate.  They should not impose him on us because it’s voters who elect leaders…”

The Deputy President said UDA was a party with national outlook and clear agenda of economically transforming the lives of ordinary citizens through the Bottom-up model.

He told Kenyans not to be misled that there is ‘deep state and system’ which can decide on who the next president will be.

At the same time, the Deputy President told Kenyans to vote out leaders whose agenda is to change the Constitution to create positions for few individuals once elected to office.

He said it was now clear that Opposition leader Raila Odinga’s agenda is to change the Constitution within 100 days to create positions for few individuals at the expense of challenges facing millions of ordinary Kenyans. Ruto said economic empowerment of ordinary Kenyans should be leaders’ top priority.

“It’s now clear that the only agenda that my competitors have for this country is to change the Constitution to create positions for few individuals instead of economically empowering majority of ordinary citizens who hustle every day to put something on the table,”

He said it was time voters rejected individuals who were pursuing selfish interests instead of empowering majority of ordinary citizens.

Other rallies are scheduled for Kakamega, Bungoma and Busia. Ruto will also expected to visit Eldoret and Bomet.