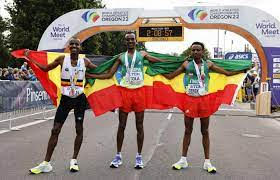 Kenya failed to win a medal in the men’s marathon on this particular day, but Team Kenya bounced back with a silver medal in the 10,000 meters from Stanley Waithaka Mburu, and then Timothy Cheruiyot and Abel Kipsang qualified for the men’s 1,500 meters final.

In the morning session, three-time world half marathon champion Geoffrey Kamworor faltered in his quest to win his first world marathon.

Before the race, Kenya represented by Kamworor and Barnaba Kiptum was expected to secure a spot in the podium but to no avail.

On July 17, the conditions were perfect for the world to witness an exciting marathon. At 6am as amateur athletes took part in the 5km race, Kamworor, Kiptum and their rivals were lined up ready to take off under the overcast conditions.

Other than that, West harm united are desperate to advance its squad this window. The hammers are closing in on a loan deal for Chelsea striker Armando Broja. They are ready to proceed with a loan deal after Chelsea were reluctant to sell the Albanian.

The Hammers were said to be ready to negotiate a fee for the 20-year-old, but will now accept Chelsea’s proposal to take the player for an initial 12 months loan and then try to make a permanent deal after that.

West Ham were said to be pursuing a permanent transfer for the 20-year-old, while Chelsea were only interested in loaning him out again.

Chelsea’s reluctance to sell the player indicates that he may have a future at Stamford Bridge. Broja spent the last season on loan at Southampton and exploded onto the scene.

After selling Robert Lewandowski to FC Barcelona, Bayern Munich will increase their bid to Juventus for the Netherlands defender Matthijs de Ligt, a 22-year-old, the player has already agreed personal terms for a five-year contract

Manchester United is convinced Frenkie de Jong is committed to joining the club despite reports in Spain that the Netherlands midfielder, 25, is desperate to stay at Barcelona.

Cristiano Ronaldo has rejected the chance to join a Saudi Arabian club for 250 million euros in wages but, the  37,year old Portugal forward still wants to leave Manchester United