FREEDOM OF THE JUDICIARY 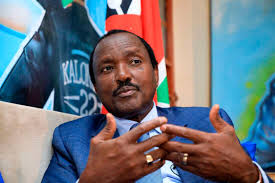 Wiper party leader Kalonzo musyoka has cajoled the president of Kenya doctor William Ruto to  grant the judiciary financial autonomy in a bid to ensure the judicial arm of government  is free from the executive arm of government. Kalonzo said this at the swearing ceremony of the governor-elect in Mombasa Abdulswamad Nassir.

”as a senior counsel ,I would  want to see a really independent Judiciary. Otherwise if we do not have a free judiciary ,with the way we are seeing the executive conducting itself ,we will not have a country”

Kalonzo went further and congratulated the state for signing  an executive order granting the national police service financial independence and also said that the same should be done to the Judiciary… I want to congratulate the president for giving the police an independent budget ,but  I would want to see the judiciary taking control of its own money ,being  given handouts “

He further said “The moment you disconnect the judiciary from the executive in terms of budget ,will be headed in the right direction”

The money administered should be used as per the second part of the article.

“the funds shall be used  for Administrative expenses of the judiciary and such purposes as may necessary for the discharge of the functions of the Judiciary,”