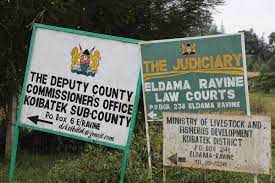 A court in Eldama Ravine has sentenced a man to 15 years imprisonment for defilement. The Office of the Directorate of Public Prosecution (ODPP) said Thursday that the convict, identified as Michael Waswa was accused of defiling a 15-year-old girl who was his wife’s friend when she visited their home in Baringo’s Mogotio sub-county.

“It is alleged that the convict had a disagreement with his wife which resulted to the wife running away leaving the complainant and the perpetrator behind,”

The ODPP stated that later that day the accused bought alcohol and supper and forced the victim to indulge in drinks before defiling her.  The ODPP further said that the convict stayed with the complainant for nine days between January 29, 2021 and February 6,  2022.

“During this period, he kept on defiling the complainant until he was arrested on 6th of February 2021 by police officers from Mogotio Police Station,”

The conviction comes a day after a man who attempted to defile a 13-year-old girl as she headed to school was arraigned at the Makindu Law Courts where he was charged with defilement. The suspect is reported to have attempted the act on the minor at Changinywa village of Kikumbulyo location, in Makueni county on Monday according to the Directorate of Criminal Investigations (DCI).

“Peter Odongo, had waylaid the minor as she headed to school yesterday morning on a bicycle, before he grabbed her by her neck and savagely dragged her to a nearby bush. The suspect then attempted to take the girl’s innocence, as she put up a spirited fight to keep him at bay,”

Despite efforts from the government to curb Sexual and Gender Based Violence, incidences of rape and defilement have been on the rise in some parts of the country.

According to the Sexual Offences Act 2006, a person who commits an offence of attempted defilement with a child is liable, upon conviction, to imprisonment for a term of not less than ten years.