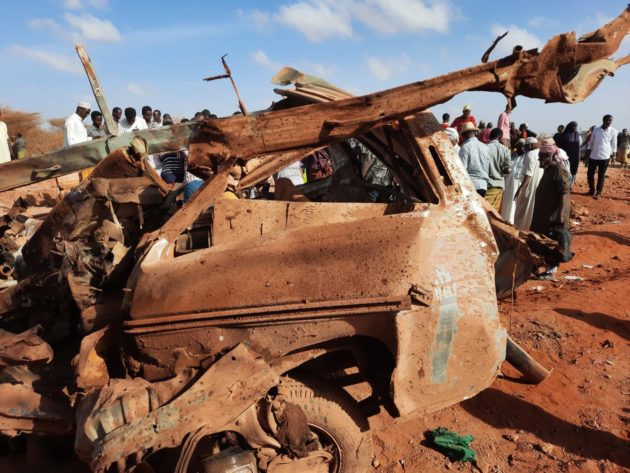 Six people were on Monday killed in Mandera when a passenger vehicle ran over an Improvised Explosive Device (IED) in a suspected Al Shabaab attack. According to Police Spokesman Bruno Shioso, seven others were injured in the incident that occurred at about 7.30am on the Arabia-Mandera RoadShioso said police were yet to establish the whereabouts of other passengers who were in the 14-seater matatu.

“It is true, the vehicle was quite overloaded and six people were confirmed dead, seven were injured in the incident which occurred early this morning,”

The attack follows a terror warning issued by various western governments including France, Germany and USA on an impending terror attack at the weekend.

“Fortunately, some of our GSU officers who were on patrol were nearby and they managed to chase the culprits who were hiding in nearby bushes,”

The foreign governments had warned that attacks would happen over the weekend but Kenya denied knowledge saying they had ramped up operations to tame any such plans.

Al-Shabaab terrorists have been attacking places in the region especially in Mandera and Garissa counties after breaching security zones, which left many civilians and security officials dead and wounded.