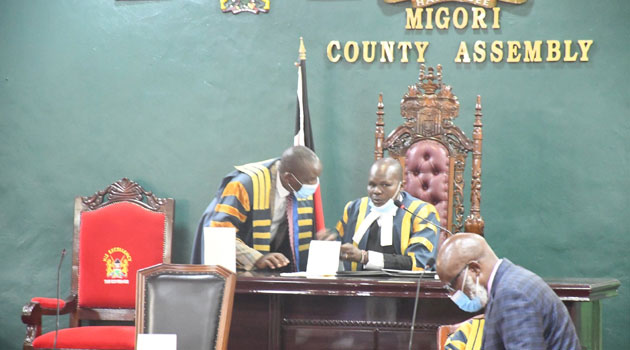 Migori County Assembly Speaker Boaz Okoth and seven other county officials were freed on Sh200, 000 surety bond on Thursday following their arrest over theft of finance records.
Okoth and seven co-accused persons were released on a bond of Sh200, 000 and one surety or alternative cash bail of Sh100, 000 each.
The Assembly Speaker, Philip Ochieng, Bonface Otieno, Peter Okinyi, John Allan, Vincent Otieno, Jackline Odira and Clifford Ochieng were accused of breaking into Chief Finance Officer’s office at Migori County Assembly between February 1 and February 2.
They were also charged with handling stolen property. The eight denied the charges when they appeared before Migori Chief Magistrate Dickson Onyango. The chief magistrate ordered the release of the eight accused persons following a bond application by their lawyer Nelson Jura.
The case is set for mention and hearing on February 17 and March 15 respectively. The Speaker and the seven co-accused persons were arrested by the police on Wednesday morning at the County Assembly premises where they had locked themselves in the Speaker’s Chambers together with files and computers they had carted away from the finance office.