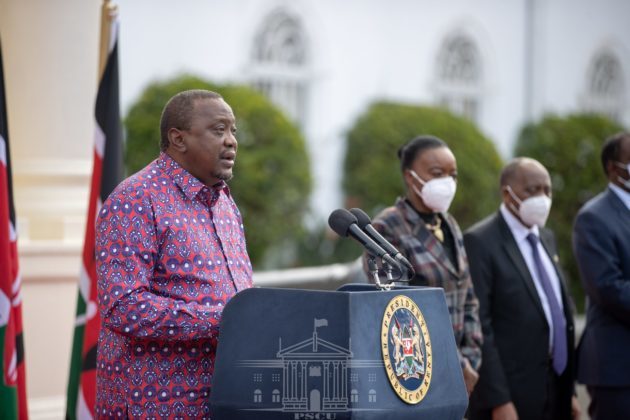 Thirteen counties mostly in Nyanza and Western regions, listed as COVID hotspots will continue operating under 7 pm to 4 am curfew until July 31 this year.

The directive is contained in new measures announced by President Uhuru Kenyatta Tuesday as part of measures to contain the virus.

“In fact, out of every 5 positive cases in Kenya a fortnight-ago, 2 were from the Western Region and what is worse: this region has experienced a high positivity rate of 21 percent compared to the national average of 9.1 percent as at that time. This swing between loss and gain in the fight against the pandemic is what I am calling the ‘containment seesaw’. You win on one theater of battle and lose in another and by default, this swing has created some form of survival instinct in our population,” Kenyatta said.

The counties of Busia, Vihiga, Kisii, Nyamira, Kakamega, Kericho, Bomet, Bungoma, Trans-Nzoia, Kisumu, Siaya, Homa-Bay and Migori have been accounting for 60 percent of the national virus caseload in the last 4 weeks, hence the decision to declare them hotspot zones.

President Kenyatta also extended the ban on political gatherings and any other large meeting for a further 60 days as the government sets to roll out a massive vaccination drive.

The president said the government plans to vaccinate 10 million people by December 2021 and 26 million by the end of 2022.

Other new measures include a mandatory covid negative certificate for all arrivals.

On vaccination, President Kenyatta said the government had ordered 13 million doses of the Johnson & Johnson vaccine by August this year.

He said the Ministry of Health is working on a clear National Vaccine Deployment Plan.

“Our strategy was to vaccinate 10 million adults by June 2022 and approximately 16 million by June 2023. 18. But inspired by our ‘Acceleration Doctrine’, which is about constantly increasing the speed of achieving our goals, we revised our Vaccine Deployment Plan,” he said.

Instead of vaccinating 10 million adults by June 2022, he said, “we will vaccinate the entire adult population of 26 million Kenyans by 2022.”

Experts have advised that with the accelerated vaccination, Kenya will have built a capacity to vaccinate 150,000 people every day from August 2021.

“And this accelerated plan will be aided by a few swift actions and bold programmes. For instance, we have ordered 10 million vaccines from Johnson and Johnson, with the first consignment arriving in Kenya in August 2021,” he said.

“And because the Johnson and Johnson vaccine is administered using a single shot, the speed of rolling out our vaccination programme will be accelerated. Using these vaccines and others in the pipelines, this is how we will vaccinate Over 10 million Kenyans by Christmas 2021 and 26 million by end of 2022. 23. And if a vaccine for under-age populations is registered by early next year, we intend to vaccinate an extra 4 million young adults by June 2022,” he said.

Health Cabinet Secretary Mutahi Kagwe said the new cases were detected from a sample size of 7, 608.

The country’s positivity rate stood at 9.5 per cent by June 29.

Kenya has so far vaccinated 1, 334, 749 million Kenyans against the virus.

“Although vaccination is free-of-charge and no one will be forced to get it, some education about it is crucial. And I say so because by Mid-2022, we have potential to reach ‘herd immunity’ in which the dangers of one infected Kenyan will not affect a community of people unchecked,” he said.

In the meantime, the Head of State has directed government agencies to plan for a human vaccination production center in Kenya in a bid to reduce foreign suppliers.

“The national quest to produce human vaccines here in Kenya will elevate our nation as a producer for both human and veterinary vaccines that we currently supply to Eastern Africa, all the way to Morocco in North Africa,” he said.

“Indeed, Kenyans have taken the civic duty of protecting themselves, their families and country against this pandemic positively. Without your exercise of civic responsibility and duty, government’s swift action would have amounted to nothing. I thank you,” he said.