A PREGNANT WOMAN IS BURNT WITH AN IGNITED STOVE OVER LOVE 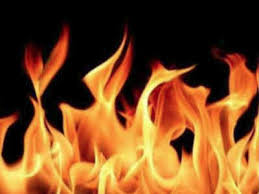 Police offices in Murang’a County have launched a manhunt for a man who allegedly threw a burning Petrol stove on a pregnant woman for turning him down in Kanorero trading centre.

The suspect is said to have been obsessed with the woman, leading to him repeatedly harassing her, despite the fact that she lived with her lover in the same apartment block. According to neighbors, the woman told off the man multiple times, warning him to stay away from her. The man is, however, said not to have taken these rejections well.

“The suspect ambushed the woman as she was coming out of the compound’s pit latrine and threw a burning stove on her. She has burns on her abdomen, thighs and hands,” Kangema sub-county Police Commander Philip Wambugu told the media.

The woman was rushed to a Kangema hospital for treatment, while police are presently searching for the suspect.