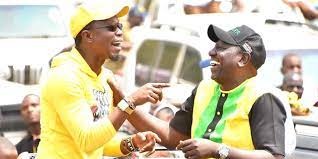 Speaking at the Foreign Office in Nairobi before his departure on Thursday, Namwamba appreciated President Uhuru Kenyatta for giving an opportunity to serve for a period spanning four years.He lauded the ministry’s team for cooperation.

“I thank the president for the appointment, but it is time to vacate the seat …We have accomplished so much and during this four-year period, we have had an amazing time,”

The former Budalangi lawmaker who ditched the ODM party to campaign for President Kenyatta’s reelection in 2017 under the Labour Party has been an ardent supporter of Ruto and has lately accompanied him on the campaign trail in western region where he comes from.

Namwamba has identified with Ruto’s United Democratic Alliance (UDA) but is yet to declare interest in any elective seat. His exit from public service comes a day after the deadline set for appointed officials eyeing elective seats to resign.