APEX COURT TO HEAR BBI APPEAL FROM JANUARY 18 TO 20 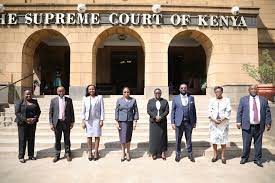 Chief Justice Martha Koome on Tuesday ruled that the consolidated Building Bridges Initiative (BBI) appeal shall be heard on three consecutive days from January 18 to 20, 2022. The CJ said appellants who wish to file a reply on the consolidated petitions should do so within five days of service.

“In the event the appellants wish to file a reply, they will be at liberty to do so within the 5 days of service of the respondents’ written submissions,”

A petition seeking the consolidation of the BBI appeal at the Supreme Court was allowed by the court. Justice William Ouko said the petition met the required threshold.

While reading the judgement, Deputy Chief Justice Philomena Mwilu ruled that the petition lacked merit and that the petitioner did not provide evidence to prove that the three judges will be biased in their ruling as he alleged.

“Their impartiality and integrity can only be negated following due process which the petitioner alleges to have invoked but which is inconclusive. Having found the foregoing determination, the notice of motion application dated 26 of October 2021 lacks in merit and is hereby disallowed,”

The court further indicated that Judicial Service Commission (JSC) had not received any formal complaint and that the three judges were not aware of a petition filed against them thus they were not aware of the grounds on which Aluochir wanted them barred from hearing the case.

“The three judges are similarly not aware of the existence of any such petition for their removal filed with the JSC by the applicant. The applicant does not adduce any evidence to the nature and contents of his alleged petition to the JSC against the judges to enable the court determine the extent to which the applicant is aggrieved against each of the named judges,”

The seven-judge bench of the Supreme Court issued the directions following Attorney General’s suit seeking to overturn the Court of Appeal judgment that stopped the bid to amend the Constitution through the BBI, an initiative sponsored by President Uhuru Kenyatta and ODM leader Raila Odinga.