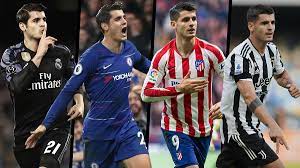 Atletico Madrid is hoping to keep Alvaro Morata this summer transfer window despite reported interest from the English Premier League Manchester United who are desperate to sign a forward
after their miserable start to the season and have identified Morata as a key target Atletico Madrid released Luis Suarez this summer after the expiration of the Uruguay striker’s contract
and wants Morata to replace him.
Alvaro Morata could end up staying in the Spanish La Liga this season as Atletico Madrid are unwilling to let the striker go this summer. The 29-year-old Spanish forward has been linked
with a return to the English Premier League, with Manchester United interested in the forward after a shambolic start to the campaign.
According to Football Espana, Morata is amongst the list of top strikers, including PSG’s Mauro Icardi, Raul de Tomas of Espanyol, and Jonathan David of Lille, whom the Red Devils, are
eyeing. Before the closure of the transfer window.
Atletico Madrid is hoping to keep Morata as Diego Simeone believes the Spanish forward is the best fit to replace departed striker, Luis Suarez, who was released after his contract expired.
Morata only returned to Atletico Madrid this summer after spending the last two seasons on loan at Italian giants, Juventus.  Morata spent the last two seasons in Turin, having initially returned to Juventus for a second spell in September 2020.
Alvaro Morata has played for a number of teams including Chelsea, Real Madrid, Juventus, and Atletico Madrid. He has won two champions leagues with Real Madrid, including the 13/14 season and 16/17 season.

Atletico Madrid was where Morata started his youth career before going on to the youth teams of Getafe and then Real Madrid, where he started his senior portion of his career.
Morata struggled to make the Real Madrid first squad under both Jose Mourinho and Carlo Ancelotti despite being a prolific goal scorer as a youth for Real Madrid Castilla.

He returned to Real Madrid after a successful stint at Juventus before moving to Chelsea in 2017. All sides found his time in West London to be generally unsatisfactory, thus Morata immediately returned to Atletico Madrid, first on loan and then permanently.