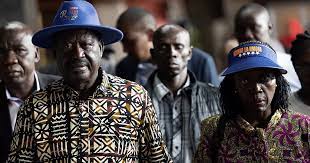 Azimio la Umoja One Kenya coalition party leader Raila odinga says that the legal process to challenge the results of the presidential released by IEBC chairman wafula chebukati on 15th august will begin on Monday 22nd.

Speaking on Sunday at a church service at the Jesus Teaching Ministry in Embakasi East, Nairobi County, Odinga stated that they are sure they won the election and he added that they will not reconcile with their competitor until court rules the matter.

“There will be no reconciliation until the truth is known. That truth we will show startin tomorrow,” he stated, “Our spirit will not be muzzled by looters and thieves. We stand with you; we will not be swayed or intimidated.”

On Martha Karua’s, Raila Odinga running mate part said the race to succeed president Uhuru Kenyatta is far from over as they are trusting the judiciary to deliver justice on the contention.

“The truth shall set all of us free. Without justice there can be no lasting peace and all we are seeking is justice,”

Kalonzo Musyoka condemned the postponement of five electoral seats across the country amid claims of IEBC staff harassment, terming it unfair.

“What’s happening in Mombasa kakamega and the four constituencies, clearly tells Kenyans IEBC has short-changed the country, no general election has taken place. The only time you can postpone an election is if there is a general emergency, intimidation cannot stop the process,”