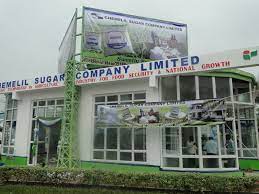 The wrangle over the control of a State-owned sugar mill in Kisumu’s Chemelil town escalated on Tuesday after rival groups engaged in clashes prompting police intervention.

A standoff ensued after a section of workers attempted to deny Chemelil Sugar Company Managing Director Gabriel Nyangweso access to the mill claiming he had been sent on compulsory leave.

Displeased workers hurriedly switched off the mill in protest of his presence. In response, transporters loyal to the Managing Director confronted the protecting workers promptly an ugly confrontation.

“There’s nothing going on at the factory despite the directive by a government,”

Police officers from Chemelil Police Station were called in to calm the situation. The workers accused the MD of running the factory with an iron fist. Chemelil Sugar Factory management and workers have been embroiled in a standoff over the payment of accrued workers’ arrears.

Chief Administrative Secretary in the Ministry Anne Nyaga met both parties and directed Chemelil Sugar Factory management to pay workers salary arrears by mid-February. Nyaga at the same time cautioned workers to refrain from activities that would hamper the smooth running of the mill.

She however was not clear on the purported compulsory leave served on the MD and the mill’s Finance Director.