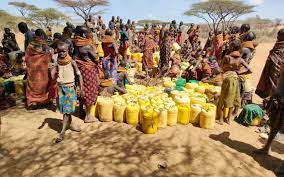 Despite the heavy rains experienced in western and rift valley part of Kenya, it is ironical that in Northern part of Kenya   are hazardously suffering as they are mostly left home by their parents who always go out to look for pasture and  water. Children’s are mostly left at home and some being tasked to take care of the aged in their families and their  siblings.

The girl child is the one mostly affected as she is the one added extra tasks of taking care of their younger siblings in  the absence of their parents. The dropout rate has increased in Samburu county as many parents move to various parts and neighboring countries to search for pasture and water leaving their children helpless and without direction.

According to the head teacher joseph Lolpranoi the region has not received adequate rainfall for the last three years and this has also led to dead of livestock owned by the predominant local pastoralists in Samburu.

According to national drought management authority­ (NDMA) 115,725 pregnant mothers and lactating women in the region are malnourished and they require treatment and therefore citizens of Samburu county urges the  county and the national government to put in place measures to regulate the rate of children dropouts caused by drought in the area.