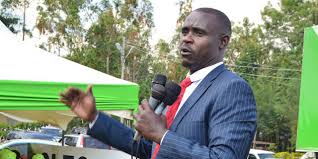 Kakamega county gubernatorial candidate under Kenya Kwanza coalition Cleophas Malala has thrown his weight with the move the Independent Electoral and Boundaries Commission took to suspend the governor’s election in the county. In his statement Malala said the decision of Wafula Chebukati is valid.

“this evening, following the press release by the IEBC chairperson. Am deeply saddened by the murder and systematic harassment meted on IEBC staff by a section of persons who want to grab power through the back door, “

In a press release released on Wednesday by the IEBC chairman said that the harassment continuing to his officers has contributed to the postponement of by-election in the county. These counties are Mombasa and Kakamega counties.

“In view of the prevailing circumstances, the Commission has postponed the by-elections slated for 23rd August 2022, to a date to be announced through a gazette notice for the following positions, gubernatorial positions in Kakamega and Mombasa,”

The election in those counties have been postponed and no actual dates for the election was mentioned.