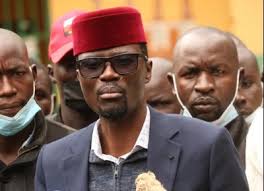 Reports have indicated that Barasa surrendered himself at the Bungoma police station after the election results indicated him as the winner of the kimilili member of parliament position.

He surrendered barely a day after the Directorate of Criminal Investigations (DCI) dispatched a team of specialised officers to help in his manhunt to bring him back after he was suspected to have gone to the neighbouring country of uganda.

He was wanted in connection with the murder of his opponent’s aide on the polling day and is said to have been searched for since then. He has been on the run since then.

On Wednesday, the famous politician alleged that the man shot was part of a hit squad sent from Nairobi. He also indicated that he died from a stray bullet during a bizarre shoot out.

The DCI has asked all Kenyans with information of his whereabouts to speak up to help nab him.

It has emerged that Barasa had been hiding in the country with detectives not able to arrest him.

This interesting development comes as tension continues to rise in the country as votes counting takes place.