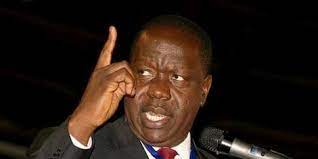 The Government has urged business firms and the private sector to resist blackmail and extortion disguised as protection money by rogue politicians. Speaking during the third roundtable engagement between the Kenya Private Sector Alliance (KEPSA) and the National Development Implementation and Communication Cabinet Committee (NDICCC), Interior CS Dr. Fred Matiangi said intelligence agencies are aware that politicians are extorting donations from prominent businesses in exchange for alleged protection in the next government.

Matiangi said the forced election campaigns donations are illegal and are being used to subvert the electoral process by providing the money to bribe voters and hire crowds. He also revealed that there was a strong link between the firms succumbing to extortion and failure to comply with relevant laws and regulations.

“Some of these crooks get money from you. We have a list of all these corporates who have been visiting leafy homes at night. Some of them are tax evaders who are now buying protection from these politicians,”

He challenged the private sector to play a more active role in enlightening its members to vote out corrupt leaders and candidates of dubious integrity.

“Unless we are really serious about these things, we will launder these characters into parliament. How do you expect them to amend your tax laws?”

The meeting was organized as a follow up on intervention measures targeting economic growth and business continuity ahead of the August 9 polls. It also dwelled on how to mitigate the negative impact of Russian war with Ukraine especially the rise of the prices of essential commodities by the disruption of global supply chains.

On election security preparedness, the CS reiterated that the police have been adequately resourced to support the IEBC deliver peaceful, free and fair elections. Matiangi also divulged that the government has dismantled procurement and corruption cartels in the procurement of police equipment and accessories, a feat that has accelerated reforms in the Service.

The CS also attributed the improved the welfare of officers and better morale within the security agencies to prudent utilization of available resources. He poked holes into the pledge by some politicians who go around the country to reportedly collect grievances from police officers.