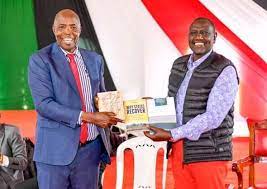 Following his appointment to the Cabinet for Education, Ezekiel Machogu might be another individual in President William Ruto’s administration to keep an eye on.

Machogu is now the third person from the greater Gusii Region to be selected as the cabinet secretary for education, a position with significant authority in the government. Machogu unsuccessfully vied for the Kisii Governor seat on the UDA party ticket where he lost to ODM’s Simba Arati.

He mounted a spirited campaign for his bid and that of President Ruto despite having complained of harassment and intimidation from state agencies.

During his tenure as MP Nyaribari Masaba (2017-2022), Machogu was accorded for having funded several schools in his Constituency to completion.

The Education Docket nominee takes over the Ministry at a time when the Country is facing a defining moment in the implementation of the Competency-Based Curriculum (CBC).

When the Parliament approves his nomination, Machogu will become the third individual from the Gusii region to be appointed to Education after Prof Sam Ongeri (2007-2012) and Dr. Fred Matiangi (2015-2017). Outgoing Education CS Prof George Magoha took over in 2019 from Amina Mohamed who was moved to Sports.