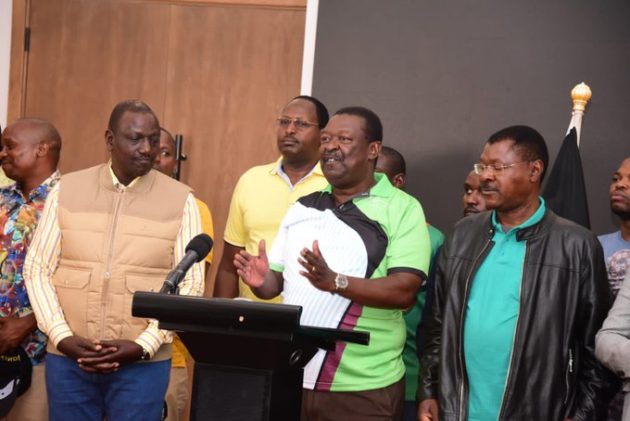 Speaking during a press conference on Budget Proposals in Meru, Mudavadi urged MPs to reject requests by Cabinet Secretary Ukur Yattani to adjust the debt ceiling from the current Sh3 trillion to 55 percent of the country’s Gross Domestic Product.

“The National Assembly and the Senate must avoid any further strangulation of Kenyans with additional debt, by refusing any request for approval of any new debt ceiling. We are aware that the National Treasury CS has prepared for submission to Parliament a new debt ceiling of approximately Sh12 trillion,”

Yattani in December last year told the International Monetary Fund (IMF) that Kenya aims to replace a nominal public debt ceiling with a debt anchor as a percentage of Gross Domestic Product (GDP) by the end of June 2022.

“The new framework would be centered on… a medium-term debt anchor set at 55 percent of GDP with debt measured in present value terms,”

The Kenya Kwanza leaders further affirmed their support for the proposal by their MPs to increase equitable shares to counties to Sh495 billion, which they claim represents 35 per cent of the audited and approved national raise revenue figure.

“Basically, if these guys were committed to giving more money to the counties, they should not oppose those amendments or these proposals,”

He further stated Member’s proposal for the provision of a Sh50billion for the support of an affordable Credit scheme to support small businesses noting that the bottom economy businesses directly employ 14.9 million Kenyans.

The Kenya Kwanza Alliance allied MPs have proposed an amendment to the provision of an additional Sh2 billion required for  ravaging effects of the pandemic, the deteriorating food security situation and drought mitigation including livestock-off program in the budget.

The debt ceiling is set at Sh9 trillion at present.