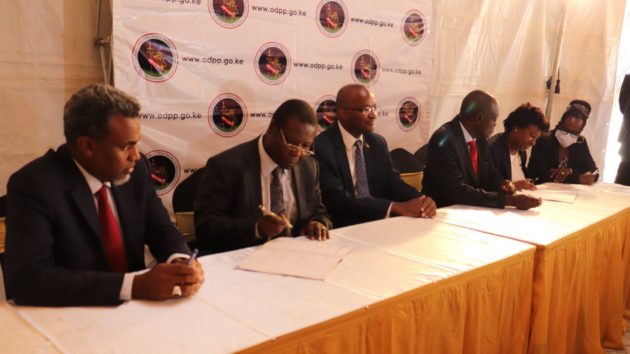 The fight against terrorism has received a major boost following the launch of the inter-agency guidelines on cooperation and collaboration in investigation and prosecution of terrorism and terrorism financing.

The guidelines, released on Tuesday, are intended to improve organizational partnerships between investigative agencies and the Office of the Director of Public Prosecutions, in collaboration with criminal justice partners, as well as to ensure effective coordination, collaboration, and cooperation in the investigation and prosecution of terror related offenses.

Speaking during the launch, the Director of Public Prosecutions (DPP) Noordin Haji said that the guidelines will enhance accountability and efficiency in the investigation and prosecution of terrorism and terrorism financing. The DPP stated that it will also enable sharing of information between different agencies and provide for a model for inter-agency information sharing which he said has been a challenge in the past.

“These Guidelines are pivotal and significant as for the first time we have developed a joint cooperation framework comprising financial agencies, investigators, and prosecutors to detect, investigate, and prosecute terrorism and related offences,’’

He noted that the guidelines will also serve as a useful resource to other state and non-state actors seeking to understand the country’s interagency initiatives to combat terrorism and hold prosecuting agencies accountable while executing their mandate.

Inspector general of Police Hillary Mutyambai said that the terrorism is transnational in nature pointing out that large financial outlays are needed to finance it. He added that to tackle it, sources for such money which includes drug trafficking, white collar crimes and trafficking of crimes must be found.

The IG stated that that profits from these elicit enterprise are laundered through financial system and cleaned proceeds are then used to finance terrorism. He stated that both state and non-state actors need to work with communities to win the war against terrorism.

“These guidelines shall be a greater tool to harmonize our approaches and synergize our collective efforts as we move forward to securing our motherlands and citizens,”

Patrick Njoroge, Governor Central Bank of Kenya said the unveiling of the guidelines is a big step forward in the fight against terrorism in the country. Njoroge stated that the guidelines will allow significant improvement in the cooperation of investigation and prosecution of terror related offences.

“This will lead to more prosecution and convictions of terrorism suspects even as the deterrence effect cannot be overlooked,”

Njoroge said that Kenya’s position as East Africa ‘s regional financial, transport and communication hub, its strategic geographical location and proximity to jurisdictions that have been known to harbor terrorist groups and its porous borders makes the country vulnerable to terrorism and terrorist financing risks. He added that Kenya needs to adopt a collaborative approach to deal with the evolving terrorism financial risks in the country.

“It is critical for Kenya to develop robust inter-agency networks that effectively employ the full range of mechanisms and tools available to identify and mitigate terrorism finance risks,”

In developing the guidelines, a number of law enforcement agencies, criminal justice actors, and civil society organizations were involved. They include the, Anti-Terrorism Police Unit, Kenya Revenue Authority, Directorate of Immigration Services, Judiciary and the Central Bank of Kenya.