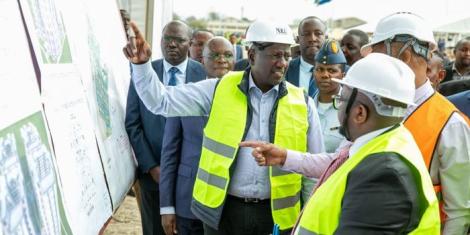 The president of the republic of Kenya, William Samoei Ruto, on his two-day tour in Nyanza will initiate the first phase of the Affordable Housing Project in Homabay County. This was earlier revealed by the State House Spokesperson Hussein Mohamed.

Hussein said the project is objected to ease the housing inadequacy and elevate the local countrywide economy. Towns that have been mentioned to profit from the project are Oyugis, Kendu Bay and Mbita.

“The affordable housing project, which is a key plan of the  government’s agenda in the Kenya Kwanza manifesto, is not only about low cost and decent housing needs but also meant to create jobs for thousands of youths and stimulate the economy,” stated Hussein.

The Government preys on building 200,000 housing units every year to bridge the housing deficit.

Hussein Mohamed further mentioned that 39 counties have detected land where such affordable houses will be built.

“All this is in line with the President’s commitment to bridge the housing deficit which stands at two million units. The target is to do 200,000 units each year,” he said.

What’s more, he said that the Jua Kali association would be responsible for supplying housing parts such as doors and hinges.