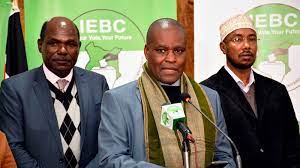 This morning, Thursday, December 8, 2022, Francis Wanderi has resigned from his post as IEBC Commissioner. Of the “Cherera four”, Wanderi becomes the third to quit his position. The four had initially claimed that the general election results announced by Chebukati were not genuine.

Raila later filed a petition in contrast to the results but was dismissed by the apex court. Commissioner Justus Nyang’aya was the first to quit on Friday followed by Juliana Cherera who resigned on Monday. Commissioner Irene Masit has been adamant with her lawyer, Donald Kipkorir, and that she is ready to face the court of appeal.

“As I tender my resignation today, I do so not because I am guilty of the allegations leveled against me by the petitioners, but because there comes a time when the country is more important than any individual, including my own aspirations as a Kenyan to see our democratic process mirror those of advanced democracies,”  Wanderi said.

Wanderi expressed that his fate is decided by the tribunal hence why he resigned.