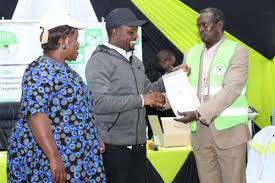 In His social media handles, the governor elect the people of Trans Nzoia for electing him.

Natembeya also requested for his competitor Hon. Chris Wamalwa to join  hands and work together.

“To my competitor Hon. Chris Wamalwa I wish to request you we join hands to transform Trans Nzoia, since the victory belongs to Trans Nzoia residents therefore it will be a great honor as leaders to shelve our competitive aspects and focus to bring change”