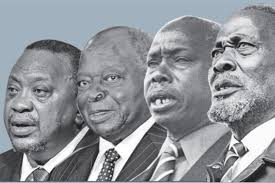 Since independence, Kenya has had over 11 general elections and as Kenyans queued to take part in voting on Tuesday 9th August 2022. This was marking the 12th general election in Kenyan history since 1963.

The first Kenyan general election was held on 6th December 1969 by the then the first Kenyan president of Kenya Mzee Jommo Kenyatta who had banned other political parties and introduced a one party state KANU and there were 158 constituencies out of 3.7 milion registered voters, only 1.6 million turned out. The 2nd general election was held on 14th October 1974 with KANU as a sole party and Mzee Jommo Kenyatta was automatically elected. Out of 4.7 million voters, only 2.6 million turned out.

In 1979 voter turn out increased to 67.3% Moi was solely elected after President Kenyatta died in 1975, out of 5.6 million registered voters, 3.7 million voted. In 1983 out of 7m voters 3m voted and president Moi was once again elected same case with 1979. The queue system of voting was introduced where by people queued behind the photos of their candidates.

In 1992, for the first time after 26 years of single party multiparty democracy was introduced whereby several parties contested and even though president Moi won, the elections were marred with ethnic violence, harassment, ballot staffing and bribing. Voter turn out was 69.4 percent where by Daniel Moi of KANU won, followed by Kenneth Matiba, Mwai Kibaki and Jaramogi Oginga Odinga all of whom followed each other closely.

In 1997, KANU won 107 or 210 seats, followed closely by Mwai kibaki of Democratic party by 1.9m, Michael Kijana Wamalwa of Ford Kenya, Raila Odinga of National Party, Charity Ngilu of Social Democratic party and others. Of the 9 million voters, 6million people participated in the elections. In 2002 Kibaki of Narc (National Rainbow Coalition) defeated Uhuru Kenyatta of KANU and Simon Nyachae became 2nd as Uhuru came 3rd. Out of 9m voters, only 6m voted.

In 2007, Mwai Kibaki of PNU defeated Raila ODINGA of ODM and it was the worst election in Kenyan history as it was marred with election violence, tribal conflicts and controversial results. Due to this, Mwai Kibaki became president, Kalonzo Musyoka became his vice, Raila Odinga became prime minister as Uhuru Kenyatta and Musalia Mudavadi became deputy prime ministers.

In 2013, elections were held on 4th March and it was the first election since independence to be carried out by IEBC and it was coming to put into action the new constitution that was promulgated in 2010 and now Kenyans had to vote for President, Governor, Senator, Women representative, MPs and MCAs. For the 3rd time Odinga through CORD coalition lost to Uhuru Kenyatta of Jubilee Coalition. Out of 14 millions registered voters, 12m voted as Musalia Mudavadi and Peter Kenneth come in 3rd and 4th respectively.

In 2017, Uhuru Kenyatta defeated Raila Odinga at first round and Odinga refused to acknowledge the results and went to supreme court whereby the results were nullified and despite that, Odinga refused to vie, giving their opponents a 97 percent victory. Out of 19 million voters, 15milion voted.

This year 2022, about 14 out of22 million Kenyans got out and made their choice and what still awaits is will William Ruto became the first Kenyan president after being a vice president like Moi? Or will Raila Odinga break the nut and for the 5th time became the fifth president of Kenya? All in all history will be written and time will tell.