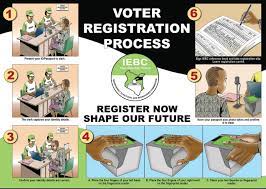 The Independent Electoral and Boundaries Commission (IEBC) set to challenge the court order that compelled it to continue with the countrywide enhanced voter registration exercise beyond an earlier stipulated timeframe. The exercise that kicked off on October 2 was expected to end on November 3 but an Eldoret court on Monday ordered the poll body to continue with the exercise until November 9. The orders were issued by Justice Eric Ogolla.
Patrick Cherono, a registered voter, obtained the court orders after he argued that the exercise should proceed until the Commission hits its target of registering 4.5 new million new voters.
“The Commission has directed that pending hearing of the case tomorrow, registration process will continue taking place until further advised,” the Commission said in a statement.
The Commission only managed to register less than 800,000 new voters.
Consequently, the Commission said that it will issue further directions after the court rules on the matter.
The Commission however maintained that it lacks adequate funds to continue with the exercise with the agency’s Vice Chairperson Juliana Cherera said that the commission had been allocated Sh1.2 billion shillings out of the Sh4 billion it had requested for the exercise.
IEBC Chairperson Wafula Chebukati decried low turnout in the number of people turning up to be registered to vote in the August 2022 election. The number of registered voters in the country stood at 19,687,885, as of May 2021, according to figures provided by the commission.
In October, Chebukati warned that insufficient funding could scuttle critical preparatory activities ahead of the election. IEBC said it was facing financial constraints in undertaking key operations to facilitate a tamper proof poll.
During an engagement forum with Faith Based Organizations in Nairobi, Chebukati indicated the National Treasury had only availed Sh26.4 billion leaving the agency with a Sh14.6 billion deficit to attain a fully funded budget of Sh40.9 billion.
“As a commission we are being exposed to the risk to under-funding,” he said.
The commission attributed the estimated budget to a legislative framework governing the electoral process which results in expensive elections. Requirements under the framework include the capping of maximum registered voters per polling station.
“The law says that you cannot have more than 700 voters in a polling station. We’re now targeting to register more than 6 million voters that will mean we will increase our polling stations from 40,833 to 53,000 plus polling station. This means we shall employ more election officials,” Chebukati said.