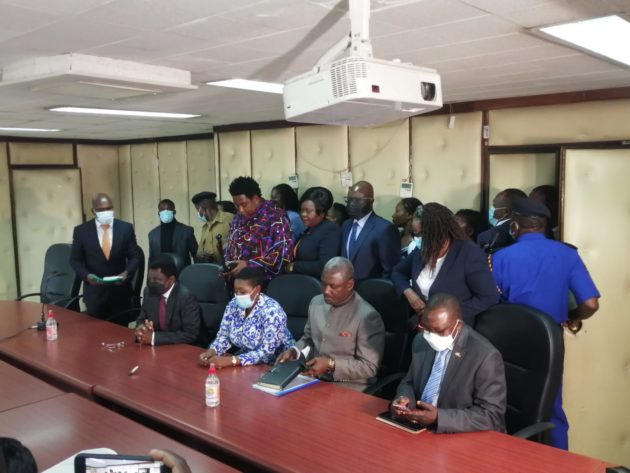 The Independent Electoral and Boundaries Commission (IEBC) has withdrawn to get a way forward on whether they have jurisdiction to hear the vote rigging claims by Murang’a Women Representative Sabina Chege. This followed objections by lawyers James Orengo, Otiende Amollo and Martin Oloo who raised queries on the poll agency jurisdiction in investigating the matter.

Amollo argued that Sabina has not violated the Electoral code of conduct and further stated that the sentiments by the Murang’a Women Representative did not in any way touch on the conduct of the electoral commission.

“To cite this as a violation is an overreach by the commission since sentiments by Sabina didn’t touch on the commission. The charge doesn’t influence response from our client,”

Orengo cautioned the Wafula Chebukati led commission that it will be treading on a dangerous path if it continues investigating the matters as already the Supreme Court had ruled that indeed the commission had bungled the 2017 presidential polls.

“It will be dangerous for you to deal with this matter; you should have second thoughts,”

The Siaya Senator pointed out that the words in breach by Sabina cannot be a substance to enter into inquiry.

“The Honorable thing for you is to withdraw from this matter and this doesn’t mean it will be the end of investigation. The words in breach cannot be a substance to enter into inquiry. The commission doesn’t have jurisdiction on this matter,”

IEBC summoned the Murang’a Women Representative for claiming that vote-rigging is possible in elections, and “even this one we can.” she said these in Vihiga County Thursday while in the company of other Azimio La Umoja MPs.

“I have heard others saying we rigged, there is some truth in it. So, if we managed to rig, even this one we can. They think they (opponents) are the smartest,”

The remarks sparked wildfire on social media, where leaders and supporters of Deputy President William Ruto are challenging her to substantiate her remarks.