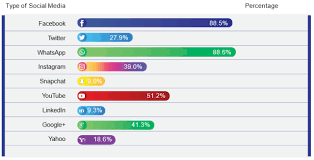 Kenya is ranked the first country worldwide in the use of social media platforms especially Facebook, Twitter and WhatsApp. Latest statistics shows that four out of ten Kenyans have an access to the internet majority going there to learn research, have fun, listen to music, look for news and do other things.  Majority of social media platform users are aged between 16-65 years and Kenya has about 32 million social media users as per July 2022 making it arise from 13 percent to 46 percent.

As per July 2022, Facebook and WhatsApp platforms were the most used with over 67% followed by twitter and other platforms. A research carried out by Imani TV on Sunday 21st showed that Facebook was the most preferred followed closely by WhatsApp. Out of 20 people I interviewed, only 3 said that they have used more than 5 social media platforms and mentioning others like Pinterest, linked in, Imo, or even TikTok they have no absolute idea about that.

As per march 2022, Facebook reports that there were about 15 million Kenyans with the largest audience being male aged between 18 to 24 years. WhatsApp on the other hand was the most used worldly with over 100 million users in Africa and 2.2 billion people globally. Countries like India, Brazil and other countries lead in majority of WhatsApp users. Like in India 487 million people use WhatsApp. The bigger question however is why WhatsApp most preferred is? It’s because of its instant messaging with on screen notifications, it completely lacks advertisements and one can share files in different formats like in form of images, videos, documents and audios while Facebook is more easy to use and access unlike other platforms which require Gmail account and other perilous tasks.

Having seen the negative effects of social media platforms, we must remember however that this platforms are also good in that they connect us with families, friends and people close to us who may be miles away, bringing them closer to be ‘just with us’. They also help us to have a quick access to information, research and innovation, involvement in civic engagement like fundraising, great marketing tools and opportunities for remote employment among other effects.

You and I as users of this platforms need to understand that they can either land us in fire or lift us higher, use it while thinking twice!