JUBILEE ROLLS OUT BILL-BOARD CAMPAIGN ON ACHIEVEMENTS AHEAD OF NDC 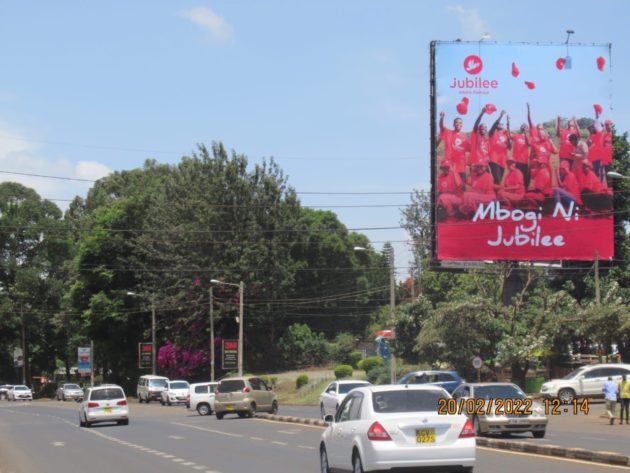 The Jubilee Party has rolled out a public campaign exercise aimed at highlighting President Uhuru Kenyatta’s successes ahead of its two-day National Delegates Convention (NDC) slated for Friday and Saturday.

Over 4,000 party members are expected to attend the event which is set to endorse Orange Democratic Movement (ODM) leader Raila Odinga as their preferred presidential successor.

The ruling party erected billboards around various major roads in Nairobi city with the messaging such as ‘Tuliahidi, Tumetimiza’ (We have delivered what we promised), ’10 years of Transformation’, ‘Mbogi ni Jubilee’, ‘Chama ni Jubilee’ and ‘Our Party, Our Future’.

The campaign comes at a time when the party is in the process of revamping the ruling Jubilee Party ahead of the upcoming elections, its leadership has moved to enhance grassroots mobilization.

The campaign is part of a re-branding exercise the party has started which includes mobilization programs  that they hope will see it regain strength and crucial support to have major stakes in the next government.

The party led by President Uhuru Kenyatta has been on the verge of disintegration with most of its members shifting allegiance to Deputy President William Ruto’s affiliated United Democratic Alliance (UDA) party.