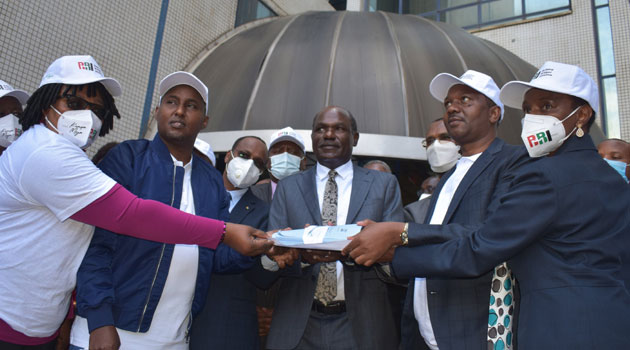 In his submission before the seven-judge Appeals Court bench, lawyer Otiende Amollo said the ruling failed to address the process in its entirety, like the functions of the secretariat as well as the promoters of the Bill.

“Against all evidence, which was not controverted, the promoters were Waweru and Junet but the (High) Court insists on finding that His Excellency President Uhuru Kenyatta was the promoter of this Initiative,” he said.

Amollo went on to explain that President Kenyatta cannot be prevented from exercising his political right to support an idea in which he feels aligns with his thinking.

The Raireda MP narrated the process Mohammed and Waweru took in collecting the 1 million signatures in support of the proposed amendments, which were then reduced into a Bill and it’s at that point that the popular initiative started.

According to Amollo, the Independent Electoral and Boundaries Commission sent a letter to the counties and confirmed that the duo are the promoters of the BBI.

He accused the High Court judges of practicing judicial activism and subverting the will of millions of Kenyans who endorsed the process, with the help of a section of politicians opposed to the BBI process and members of the civil society.

The Rarieda MP pointed out that the five judge-bench coined the word ‘initiator’ to explain that the subject referred to as the above was behind the initiative.

“Having realised that the President was not the prompter, the Court then coined a term initiator which does not exist in Article 57. There is only a promoter and the supporter, in respect this word (initiator) is then used in the judgement to camouflage the difficulty to identify the promoters,” he explained.

Otiende cautioned that if the ruling by the High Court was allowed to stand, it would make it impossible for any Kenyan to initiate an amendment to the Constitution as it will force the promoter to go through all the steps involved in law from collecting signatures all the way to Parliament.

“Those prescriptions by the Court are impossible to achieve. They are eutopic. There were over 4 million signatures and not a single person came out to complain that my name was there erroneously,” the Rarieda MP said.