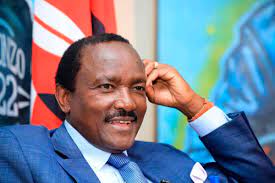 Wiper Party leader Kalonzo Musyoka has dropped his presidential bid and is back in the Azimio Coalition after accepting the Chief Cabinet Secretary position offered by Raila Odinga.

Speaking during a press briefing on Thursday, Kalonzo stated that he arrived at the decision following extensive consultations with his party officials He announced that he has deferred his bid and will fully support Odinga’s campaigns.

“After wide consultations, I with great humility accept my nomination as chief minister in Azimio one kenya coalition,”

He also announced that he was heading to Mukuru Kwa Njenga where he will address a joint rally with Raila, Karua among other top coalition leaders and members. Kalonzo was flanked by several wiper leaders, and KANU chairman Gideon Moi who is said to be the one who spearheaded the intense negotiations that have seen Kalonzo rejoin Azimio.

Kalonzo also congratulated Narc Kenya leader Martha Karua for having been selected as a running mate for the Azimio coalition, also committing his full support to their candidature as well as the coalition.

‘I commit myself to the Azimio one Kenya campaign because our objective is winning,”

Last month, Kalonzo announced that he will be vying for the presidency in the August 9 elections, after the party severed ties with the Azimio coalition led by Raila Odinga citing deceit. His actions came after Odinga picked Martha Karua as his running mate, a slot he thought was his reserve.