KENYA KWANZA AND AZIMIO ONE KENYA WRANGLES OVER THE MAJORITY SEAT 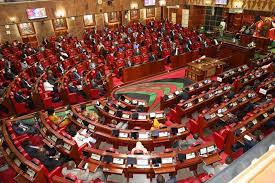