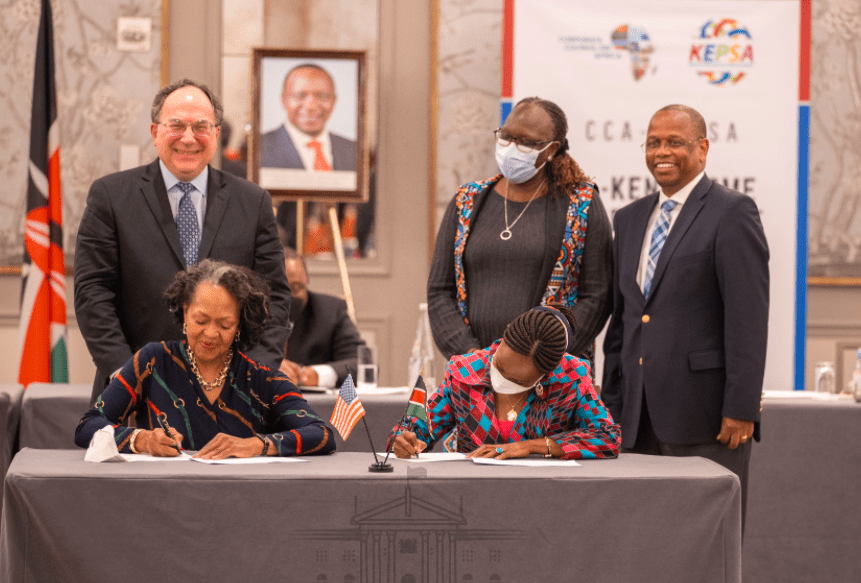 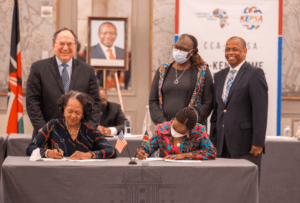 President Uhuru Kenyatta accompanied by the Leader of Majority in Kenya’s National Assembly Amos Kimunya, Cabinet Secretaries Betty Maina (Industrialization) and Raychelle Omamo (Foreign Affairs) witnessed the signing of a detailed private sector agreement that seeks to expand trade and investments between Kenya and the United States of America.

The agreement, signed between Kenya Private Sector Alliance (KEPSA) and Corporate Council on Africa (CCA), provides a framework for Kenyan and American businesses, especially the small and medium enterprises (SMEs) to partner through information sharing, training, logistics, and financing.

Speaking at the signing ceremony in New York, on the first day of his two-day official visit to the US, the President said the Government backed pact was part of efforts to support the growth of Kenyan SME sector as a key enabler of wealth and employment creation.

He noted that the agreement will create new opportunities for Kenyan SMEs saying the sector plays a key role of guaranteeing the country’s economic resilience especially in times of turbulence.

“I have always had the opportunity of saying that Kenya is a country that people always wonder where the resilience of our economy comes from. A country where despite a myriad of shocks, occasioned over the years, always prove to be very resilient.That resilience comes from our small and medium enterprises. It comes from what you refer to as the informal sector, what many in Kenya refer to as the Jua Kali,” the President said.

President Kenyatta noted that both Kenyan and U.S economies are largely driven by SMEs saying that the agreement would help accelerate Kenya’s economic recovery efforts from the ravages of the Covid-19 pandemic.

The President assured of his administration’s support in the implementation of the trade pact saying its success is the success of Kenyans, the Government and the country at large. Kenyatta challenged the American Government to be a reliable and predictable trading partner for the initiative to succeed.