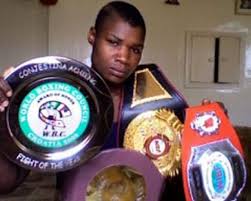 In the Yala Division of the Siaya District’s Umiru Village, is where she was born on October 20, 1977. In a family of ten, Conjestina is the fifth born. Her mother is Gertrude Auma, and her father, Clement Adalo who is a retired medical officer. Joseph Kusimba, her older brother, used to box and now owns a gym in Mathare, Nairobi. This proves that boxing runs their blood.

She is nicknamed “Hands of Stone” and is ranked number five boxer in the world. She became the first African woman to hold an international title when she beat Ugandan Fiona Tugume to take the vacant WIBF Middleweight title. During her era she was able to win 17 Wins: 17 boxing matches 4 draws 6 losses in a total of 27 fights in her career.

Conjestina Achieng’s father requested assistance from Kenyans to take his daughter to the hospital in January 2011 after she started acting differently than usual. He claimed that she had pulled her kid out of school, destroyed all of her boxing equipment, and removed everything from the gym she had opened in 2009.

She was checked into the Nairobi hospital Mathare, which specializes in treating mental illnesses later, she was freed. In September 2012 Conjestina revealed that she was in bewilderment and utter despair. The former boxer confirmed off her belts. She became stated to be residing in poverty and could no longer afford to pay her Ksh 2000 rent for four months. She ended up in care of her more youthful sister.

Conjestina was later taken to the Mathare Hospital through Ida Odinga. While a famous marketing campaign on social media raised sufficient cash for her to transport right into an extra snug dwelling. However, things have now run from bad to worse, Sad pictures of Conjestina Achieng’ have surfaced and now trending online showing how the former boxer’s life has changed.

The veteran boxer has been suffering from mental health problems for a long time and recent reports say she is currently roaming the streets of Siaya.  She was famous in the 2000s before he officially retired from boxing in the year 2007. It is the time that a call has been issued to Kenyans to unite so that they can give a hand to the former boxer before the situation worsens.