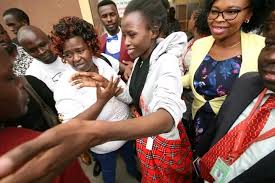 Investigations by Ombudsman have revealed details on the state of Kenyans living and working in Saudi Arabia as domestic workers. Among the discoveries from the Commission on Administration of Justice (CAJ) is that Kenyans are underpaid for the work they do, and that their working conditions are not favorable.

“There are gaps in the Bilateral Agreement including; Kenyans being paid lower wages in comparison to their counterparts doing the same kind of work from other countries, unequal timelines for notice of termination of employment, and a lack of clear sanctions for rogue domestic workers,” the report showed.
The report also indicates that Kenyan domestic workers in the Middle East face abuses that range from passport confiscation, imprisonment ahead of deportation, sexual abuse, racism and religious intolerance. Other abuses include labor exploitation, psychological abuse and movement restriction.

The findings from the report also suggests gaps in the process of recruiting the domestic workers, with the National Employment Authority (NEA) lacking sufficient legal and enforcement framework for dealing with rogue agencies and migrant workers. Also, time allocated for predeparture training of migrant workers is 189 hours against the set 200 hours.

One of the Kenyan embassy in Riyadh, Saudi Arabia, is underequipped, with lack of safe houses and continued transfer of sponsorship among the major challenges. Kenya’s labor laws have also been blamed for the problems affecting migrant workers. The report found that the laws do not refer directly to labor exportation, thus can’t protect the workers.

The Commission on Administrative Justice wants the Office of the President to initiate a multi-agency integrated system for all stakeholders. This, it said, will not only ensure the digitalization of the recruitment process, but also reduce bureaucracies in the process and promote the credibility of the recruitment and management of migrant domestic workers by enhancing interagency collaboration, coordination, and cooperation.

This comes after a series of incidents where Kenyan domestic workers have been tortured and others killed in the middle. The most recent is the case of Diana Chepkemoi, a Kenyan university student who caused rage online after she revealed her suffering in the hands of her employers in Saudi Arabia. Dian returned to the county following intervention from the top leadership in Kenya.