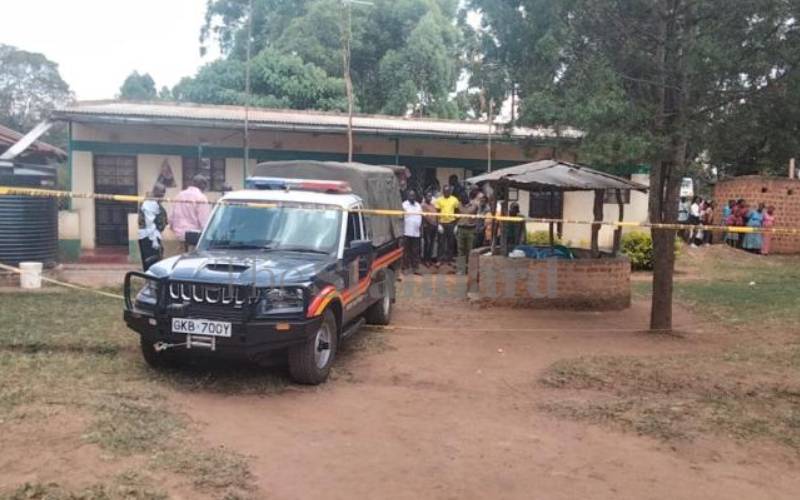 The bodies of a police couple were yesterday morning found in a pool of blood in their house at Kiungani Police Station in Kiminini, Trans Nzoia County, in what is suspected to be a homicide-suicide act. The officers, Constable Abel Andari (28) and his wife Dorcas Chebet (27) had a one-year-old child.

County Police Commander Jacinta Wesonga said that Constable Chebet, who is attached to Kiminini police station, less than 10 kilometres from Kiungani, arrived at the station at around 10.30 am to visit her husband.

It is alleged the couple had a brief chat before Chebet headed to her husband’s house within the station. Andari followed her shortly, and they reportedly locked themselves inside the house for about one hour. Later, officers within the station heard gunshots from the house at intervals, and they sprang into action to ascertain what was transpiring.

“After an hour or so, officers said they heard a gunshot. About 10 minutes later, they heard another, then the third shortly after,”

Wesonga said the Directorate of Criminal Investigations has already launched investigations into the incident, noting that there were no reports of any squabbles between the couple. Preliminary findings indicate that Chebet shot Andari on the chest, before turning the gun on herself. It is alleged she shot herself on the forehead using a G3 rifle.

The police had to break the door and found the lifeless bodies of two officers lying on the floor and three spent cartridges recovered at the scene. By the time of going to press, no relative was available for comment over the incident that has left many in shock. The bodies of the two officers have since been transferred to the Kitale Level Four morgue awaiting an autopsy, while the used firearm and spent cartridges have been collected for forensic examination.