LAND DISPUTES IN CHEPCHOINA TO BE SETTLED BY THE STATE 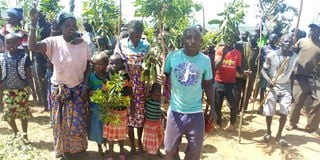 West Pokot leaders have viced the government for taking too long to settle the Land disputes at the Chepchoina scheme, which extends its border with Trans Nzoia County. The scheme accommodates more than 10,000 squatters, has been faced by constant land wrangles, with squatters expelled every planting season.

Leaders and residents now urge the government to once and for all address the expulsions, which they consider not worthy. A public meeting was held at Katikomor, Kapenguria,  to discuss the matter. Led by Kapenguria MP-elect Samuel Moroto and his Endebbes partner Robert Pukose who were against the evictions calling them selfish and claim to be driven by a team of high class clients in the region.

It is alleged that squatters had complained that top government officials from Trans Nzoia were forcing them out of their plots with an objective of resettling other people. The settlers, who claimed to be former long-serving employees of the Agriculture Development Cooperation (ADC), alleged that they were forced out from their lands despite living there for 24 years after the land being allocated to them by President Daniel Arap Moi.

Anna Edung, one of the squatters, claimed she worked on the ADC farm for 17 years and was a beneficiary of the settlement scheme. She claimed unknown squatters were being brought in by government officials who are expected to protect them.

Mzee James Kaburu, 82, who claimed to be another victim of the alleged evictions, wants the government to address the issue immediately as he is illiterate. He says corrupt officials are keen to deceive him and take away his land as battles emerge.

Moroto promised to protect the squatters, who he said live in harmony irrespectiful of their ethnic backgrounds

The MP-elect promised to take a delegation of squatters to a new President when he is sworn in.

“Land is a very sensitive issue and should not be taken casually. We have security officers in the area but they are doing nothing,”

Pukose said phase two of allocating the land to squatters under the scheme was interrupted by quarrels because of double allotments. However, Pukose assured the squatters that they will not be deprived of their land, promising to pursue the matter.

“There was double allocation in 1994 and 1997 and the problem was created by former Lands minister James Orengo. Orengo confused this area,”