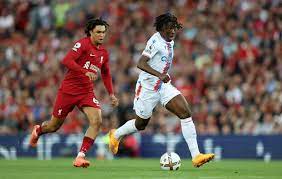 Liverpool was yesterday held by Crystal Palace to a disappointing 1-1 draw at Anfield stadium.

Wilfred Zaha scored an opener in 32nd minute which led Liverpool down to 1-0 at half time. Luis Diaz earned Liverpool a crucial point in the second half.

The red were hoping to register their first win of the new campaign during the tie, having dropped points in their season opener against newly-promoted Fulham at Craven cottage.

The hosts which were Liverpool had a lot of goal scoring chances but failed to convert the chances to goals.

Darwin Nunez had a chance to equalize before the break but was unlucky to find the target as his effort hit the inside of the far post.

The match saw Darwin Nunez earn a straight red card for playing badly to Joachim Andersen in the second half of the match.

Despite Liverpool dominating a major part of the game by possessing 72% of the game while the palace possessed 28% but they had nothing to show for it.