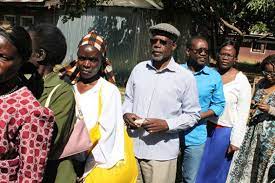 The Senatorial by-election which is currently underway is facing low voter turnout at Bungoma DEB Primary School. The seat became vacant after Moses Wetangula was elected as the National Assembly speaker. The Independent Electoral Boundaries Commission (IEBC) said stations opened at 6 A.M and will be open until 5 P.M. At 7.30 A.M, only two voters had turned up to cast their votes.

National Assembly speaker Moses Wetangula, contestant Wafula Wamunyinyi of Azimio la Umoja and Mwambu Mabonga of UDA were first on the scene to vote. Mabonga cast his vote at 6.40 A.M at Mwiyenga Primary School while Wetangula voted at Namakhele Primary School a minute later at 6.41 A.M. Wamunyinyi on the other hand finalized the list after he voted at 7.15 A.M at Ranje Primary School. The DAP-K Senator candidate spoke against voter bribery. He called on the IEBC to be cautious and to take severe measures for all those that act against the election laws.

“On Monday we had a fruitful meeting with IEBC where we agreed nobody will be involved in election malpractice,” Wamunyinyi said.

Mwambu Mabonga of UDA encouraged the residents to show up and emphasized on how confident he was about winning.

“I know this by-election has come at a time when people are working. I want to encourage those who are within to turn up and elect their senator,” he said.

“Let us vote and leave IEBC officials to do their work. There is no need to bribe voters to elect you when they know that you aren’t equal to the task,” he added.

Wetangula also called on the people of Bungoma to cast their votes wisely.