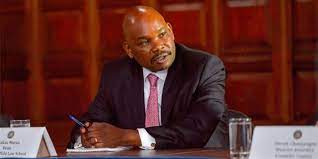 Makau mutua who is the spokesperson to Raila Odingas presidential campaign secretariat has  accused the deputy president William Ruto for failing to address the nation how he would want to deal with corruption and whether he should win the august 9th polls.
Mutua claimed stating that the most important issue facing the nation right now was conspicuously missing from the UDA manifesto and the word corruption was not mentioned not even once did the word crossed Ruto’s lips. In his statement ,Mutua also alleged that the united democratic alliance UDA party had a collection of questionable political character.
Ruto, while delivering his manifesto at kasarani said that the coalition would allow relevant institutions tasked to deal with corruption to be independent. Ruto also said the Kenya kwanza commits to ending the weaponization of anti-corruption efforts by allowing the relevant institutions to freely exercise the independence given to them by the constitution.
BY FAITH MUKHWANA