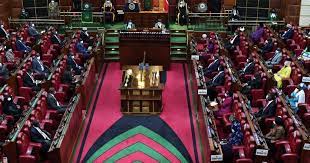 Confusion has rocked political parties in the country over the implementation of the requirement that Members of County Assemblies (MCAs) with aspirations for higher office in the August 2022 polls should resign by midnight of February 9, 2022.

The Constitution, Article 99 (2) d stipulates that a person is disqualified from being elected a member of Parliament if the person is a member of the county assembly. The provision is further bolstered by the Elections Act that stipulates that all public officers seeking elective positions have to vacate office six months to the General Election, in this case February 9, 2022.

The ambiguity on the subject has prompted the United Democratic Alliance (UDA) Party to withdraw its notice that had directed the ward representatives to resign.

“The Party wishes to withdraw the notice until we seek urgent clarification from the Independent Electoral and Boundaries Commission (IEBC),”

The Party Leader of the Democratic Party and National Assembly Speaker Justin Muturi on Tuesday urged the MCAs aspiring to seek higher electoral seats such as Presidential, Governors or Member of Parliament to resign to avoid being knocked out by a technicality.

The House Speaker cited the court case in which Gatundu North MP Wanjiku Kibe has had a running petition filed against her by her 2017 competitor Kungú Waibara who wanted her term terminated by the court on the technicality of failure to resign six months before as Kiambu County MCA before she vied. Waibara won the cases in the High Court and in the Court of Appeal respectively, but Kibe moved to the Supreme Court where the case is awaiting final determination.

The MCAs have protested the move and vowed to stay put.