MORE CUBAN DOCTORS TO BE DIPLOYED IN COUNTY HOSPITALS THIS MONTH. 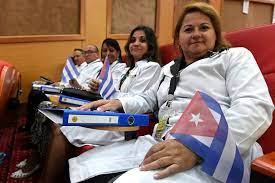 Kenya has received 79 more Cuban doctors in the second deployment program who will be deployed to county hospitals on October 25.The first batch of Cuban doctors arrived in the country in 2018 as part of implementation of an agreement signed with Cuba in 2017. This follows an agreement signed by Health Cabinet Secretary, Mutahi Kagwe and his Cuban counterpart Dr. Jose Angel Portal Miranda on the doctors exchange program between the two countries.

“The Cuban specialists have completed the induction at the Kenya School of Government and will be deployed in due course. In order to meet the demands more specialists will be sourced from Cuba and will arrive in the country in due course,”.

The Governors have refuted claims by the Kenya Medical Practitioners, Pharmacists and Dentists Union (KMPDU) that the Cuban doctors were employed at the expense of experienced doctors in the country.

Narok Governor Samuel Ole Tunai confirmed that the health specialties from Cuba cannot be sourced in the country as the union claims.

“It is not true that we have employed the Cuban Specialists at the expense of our doctors here in the country. In Phase one each county got one or two specialists who were very instrumental in healthcare system in the counties. In fact, they used to rotate in different counties and were very helpful,”

KMPDU had previously accused the government of bypassing its own medics and opting for foreigners. It demanded employment of 1,000 jobless Kenyan doctors, as well as ramping up counties’ medical workforce. The union lamented that the country is paying the Cuban doctors handsomely while there are over 2000 Kenyan medics who are unemployed. However Tunai justified the claims saying that as county governments they have employed doctors who are qualified in the country. Even at times they lack certain specialties forcing them to outsource from the neighboring countries. Therefore as a country it’s important for us to have exchange programs because even our own nurses have benefited from Kenya-UK exchange program.