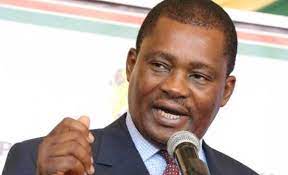 speaker of the national assembly Justin Muturi has said the next president can still come from the Mt.Kenya region.

The vocal speaker urged residents to unite behind a leader who will be looking at their interests saying they should be careful not to fall into the wrong hands….

speaking at ACK  Kongoini church in Kiharu, Muturi, in direct reference to presidential candidate Raila Odinga’s promise to offer sh6000 to the jobless, said the move will not be a solution to ending poverty

Dennis Karani Gachoki who was accused of killing someone by the name Mutova has surrendered himself to the DCI Dennis...

The Government has urged business firms and the private sector to resist blackmail and extortion disguised as protection money by...

It's sad, that our leaders are focusing on regional politics. Most of them claim certain regions to be theirs when...

Kenyan youth attempt to join the labor market annually but only about 15 percent of them are successful in securing...

HOW TO SHOW EMOTIONAL SUPPORT

Giving emotional support is a way of helping people feel connected and less alone. This is not always easy, and...

ORGANIZED CRIME IN AFRICA ON TABLE BEFORE DELEGATES FROM 32 STATES

Kenya is hosting the 4th General Conference of African, the Indian Ocean, and The East Africa Association Prosecutors, 2022 to...