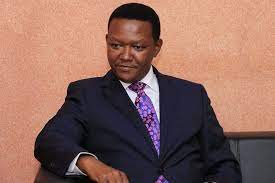 Maendeleo Chap Chap (MCC) Party leader Alfred Mutua has taken campaign pledges a notch higher, promising that his government will give newly married couples between Sh500,000 to Sh1 million loans to build new homes, if elected president in next year’s elections. While launching his manifesto which mainly focused on the plight of the youth in the country, the Machakos Governor said the move is aimed at improving the quality of homes in the country.

In his 13-pillar based manifesto, Mutua unveiled a raft of other promises which held a bag of goodies to the youth and the marginalized. Tax reductions on the cost of petrol, food and electricity marked Mutua’s manifesto as he promised to lower the high cost of living due to high taxes. If elected President in 2022, Mutua has promised to slash the cost of maize flour by half, a promise dangled by presidential contenders every time the country heads to the polls.

“My government will ensure that every household is able to put food on the table. For example, the cost of Maize flour will drop from Sh120 per 2 kilograms packet to less than Sh60,”

In his first three years in government, the Machakos Governor has promised the youth over 5 million jobs with tax relief for those who will venture into self-employment.

“All existing businesses owned by youth to have annual taxes reduced by 50% for three years. – All new startup businesses by youth to have a tax waiver of 60% for 3 years. – If the proprietor/entrepreneur undertakes a recognized business/accounting and marketing course, they get a waiver of 80%. In addition, if the business employs two other youths, the waiver will be 100%,”

Family men and women, and especially men between the ages of 40 – 60 have been promised a kitty funded by the exchequer. The fund dubbed “Forgotten Active Middle” will carry an interest rate of a maximum of 2%

“My Chap Chap government will set up a fund for those between 40–60 years old to draw funding for school fees for their children, purchase of assets such as land and homes, training, business proficiency and personal skills training,”

The MCC presidential candidate’s manifesto will also set up a food fund and food reserves for the poor and marginalized who are adversely affected by drought.

“Replenish the stocks every year to ensure fresh food is stored. This will eliminate hunger and starvation every time the rains fail because we will be able to make food available to the market. A FOOD FUND to support the vulnerable will be set up. It is possible to ensure that no Kenyan ever starves again,”

Mutual also promised to revamp the agricultural sector in the country through reduction of imports which he said had killed the sector that was once the backbone of the economy.

“All Kenya agricultural products being exported will be encouraged to have a form of value addition. Exporting raw produce for overseas value addition and later being resold to us will be strongly discouraged. This will create employment and make agriculture a very lucrative venture,”

The candidates have also dangled promises ranging from bottom-up economic models, free secondary or university education, jobs for the youth, accelerating the war against corruption among other sweeteners to woo voters as the campaign period heats up.