MUTYAMBAI FINED HALF A MILLION FOR SNUBBING SENATE SUMMONS 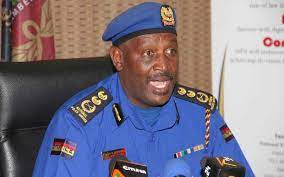 Inspector General Hilary Mutyambai has been fined Sh500,000 for snubbing its invitations and summons. Mutyambai failed to appear before the Devolution and Intergovernmental Relations committee three times attracting the wrath of the senators.

The committee chairman Homabay Senator Moses Kajwang said that Mutyambai must appear before ita board.

“We are not going to stop at the fine. The Inspector General Hillary Mutyambai must appear before this committee,”

The IG was expected to give details on allegations that state machinery was used in the eviction of tenants from houses in Pumwani and Eastleigh. Allegations are rife that the exercise that was undertaken in the strict surveillance of the police and NMS officers.

Elgeyo Marakwet Senator Kipchumba Murkomen insisted that the Inspector General must appear before the Committee and prove that the National Police Service was not involved in the illegal evictions.

“We want to have evidence that the money will come from his personal account and not public coffers,”

This comes even as Nairobi Metropolitan Service (NMS) boss Mohammed Badi also skipped the Committee invitation for the third time.

The Badi led entity is accused of aiding land grabbing in different parts of the city especially police stations which have no title deeds.

Badi skipped the Committee sitting and sent a letter to indicate that he was unwell and admitted to Karen hospital.

The faces behind private developers accused of illegal evictions of residents of Nairobi City Water and Sewerage staff quarters in Eastleigh and Pumwani staff quarters are still hidden.

Of contention is the property belonging to Pumwani Staff quarters and Nairobi City Water and Sewerage Company (NCWSC) where NMS evicted residents with private developers taking over ownership of the property.

The devolution committee members who visited the two sites are investigating the two instances of alleged land grabbing following a statement of intervention by Nominated Senator Millicent Omanga.

The private developers started building rental properties on the disputed parcel after the residents were evicted in June 2021.

Senators have turned their guns on Badi claiming that his entity has taken over management of the Nairobi City County to abet illegal grabbing of land in the devolved unit.