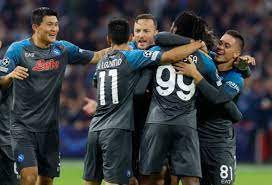 Napoli reached the champions league knock-out stages with two games to spare after a flamboyant 4-2 victory over Ajax on Wednesday maintained their 100 percent victory in this year’s competition.

Nine points separate the serie A leaders from the third-placed Ajax, who0 can still make it through with two wins from their final two matches against Liverpool and Rangers.

Alfred Schreuder’s team gave a much better account of themselves than they did in the 6-1 thrashing Napoli inflicted on them in Amsterdam last week and kept the game alive until the final seconds through Davy Klaassen and Steven Bergwijin.

But they couldn’t stop an impressible Napoli team who are yet to lose a game this season in Italy or on the continent and a packed stadia Maradona dreaming that this could be their year.