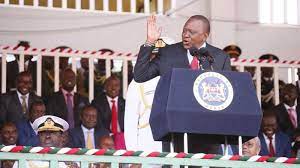 President Uhuru kenyatta has ordered the lifting of the dusk to dawn curfew.He said this during Mashujaa Day Celebrations at Wang’uru stadium in Kirinyaga County, Uhuru said the move follows a review of the containment measures by the national response team and the National Security Council. He said it had been established that surge of infections had decreased to below two per cent in the last two weeks.

This has happened barely two days after  Kenyatta hinted the lift as he was responding to Karatina residents who had urged him to lift the dusk to dawn curfew, saying it had made life difficult.