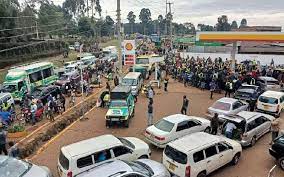 There is a looming transport crisis as Public Service Vehicle (PSV) operators’ countrywide start grounding their fleet due to the persisting fuel crisis in the country. Matatu Owners Association (MOA) chairman Simon Kimutai on Tuesday said that at least 50 percent of their vehicles have been grounded due to a shortage of the precious commodity.

Kimutai explained that even those operating had to queue overnight so as to secure fuel to facilitate daytime operations, with most petrol stations resorting to rationing the quantity of fuel being sold per vehicle.

“If you look at our roads there are few public service vehicles operating and this situation has paralyzed our operations,”

Operators at Iten in Elgeyo Marakwet called on the government to address the fuel crisis saying if not addressed they may be thrown out of business.

Samwel Kiptoo, a driver plying the Iten Eldoret route said he was forced to spend a night in Eldoret queuing for fuel which he carried with a jerrican back to Iten. He said they were buying the fuel at Sh200 per litre of petrol which left them with no option but to increase fare from Iten to Eldoret from Sh100 to Sh150.

“With the current fares, very few people can afford thus few will be travelling which will affect our business,”

John Kiprotich, a boda boda operator in the area said they are being forced to sleep at petrol stations to get fuel immediately it is supplied to enable them operate during the day.

Long queues are still being observed in different parts off the country even after sh 34.4 billion was injected into fuel stabilization mechanism raising hopes that the crisis will be resolved.