ONE KENYA ALLIANCE LAUNCH A COUNTRY TOUR AHEAD OF 2022 ELECTIONS 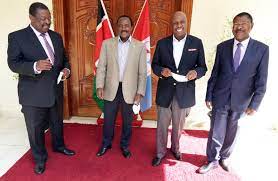 The One Kenya Alliance (OKA) set to embark on a rigorous meet the people campaign tour to popularize the alliance ahead of naming its flag bearer. OKA is fashioned as the alternative to the Raila Odinga’s Orange Democratic Movement (ODM) and William Ruto’s United Democratic Alliance (UDA).

OKA has pegged its campaign call on the revival of the economy, as well as unity of purpose and tolerance among Kenyans.

OKA principals led by Amani National Congress (ANC) Party leader Musalia Mudavadi will be in Western Kenya on Friday where they will mount a mega rally in Kakamega town after meeting the alliance’s delegates in the region.The team is also expected to hold a voter registration mobilization campaign at the Khayega Market.

On Saturday, the OKA team will be in Mudete, Chavakali and finally in Emuhaya (Luanda) for a series of meet the people tours in Vihiga County.On Sunday, the team will attend a Church Thanksgiving ceremony in Thika, Kiambu County and later address a public rally in Githurai.

Kakamega Senator Cleophas Malala confirmed the tours will mark the beginning of a series of meet the people rallies in part of efforts to make OKA a strong formidable outfit in readiness for the 2022 presidential race and general election.

“All the One Kenya Alliance principals are expected to attend the Western Kenya tour. We have also mobilized all our Members of Parliament and a good number of MCAs. We want to chart a new form for OKA and put in place structures that will help strengthen this alliance,”

“We have been in this game with our opponents and we know where and when to fix our game. Let them put their eye on what is going to happen this weekend. They will then understand what we are saying that Western Kenya is fully behind Musalia Mudavadi,” he said.

ANC leader has however maintained that OKA will continue reaching out to like-minded political formations in a bid to build a broad alliance for 2022.

“We need to let Kenyans know that the deadline for any formal registration of a coalition is next year. We have various technical teams that are systematically chatting away forward for OKA. We are also reaching out to other political parties, and not too long-ago Kenyans see us meeting with the leadership of KADU-ASILI and we have also reached out to Martha Karua (NARC Kenya) and had a conversation with her on what we see as the way forward…She is consulting with her team then she can make up her mind if she wants to partner with OKA or not. We are sending out a very clear and strong message that we are open to dialogue with other political players,”