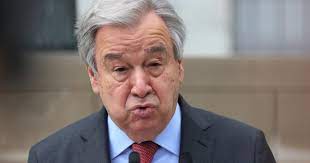 The United Nations (UN) has lauded President Uhuru Kenyatta for leading efforts as the East African Community (EAC) Chairman to foster peace in the Eastern Democratic Republic of the Congo and the neighboring countries.

Secretary General Antonio Guteress who spoke with President Kenyatta on Saturday assured him of the global body’s support in the initiatives being put in place by the regional bloc to promote peace in the war-torn country and the region at large.

“I just spoke to President Uhuru Kenyatta of Kenya. The UN fully supports the Initiative by the East African Countries to bring peace in Eastern Democratic Republic of the Congo and the neighboring countries,”

The mineral-rich DRC is struggling to contain dozens of armed groups in the east of the nation, many of which are a legacy of two regional wars a quarter of a century ago. Millions of people died from violence, disease or starvation in the 1996-7 and 1998-2003 Congo Wars — a conflict that enmeshed countries from around east and central Africa.

President Kenyatta and other leaders of Uganda, Burundi, Rwanda and the DRC met in Nairobi on Thursday last week to discuss the crisis, with President Kenyatta later announcing that the Kinshasa government would hold a “consultative meeting” with the rebels to broker a peace deal.

The Nairobi talks come barely a month after the DRC was admitted to the regional EAC block, a seven-nation bloc with a single market allowing free trade and movement of citizens.