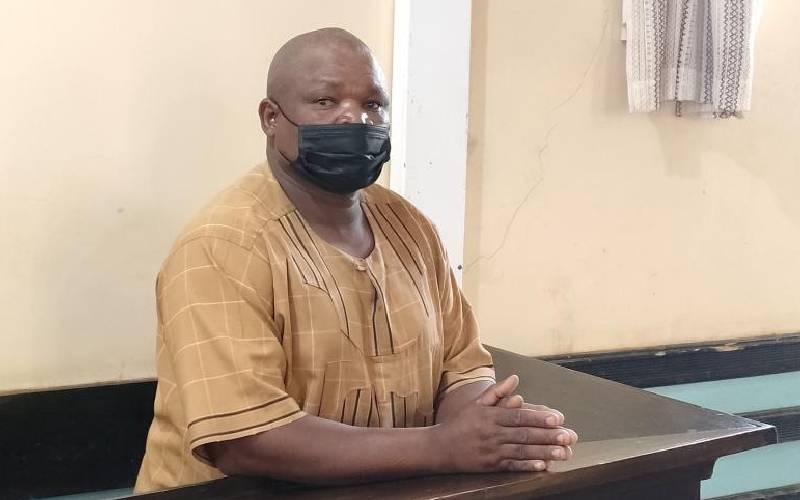 An ex-policeman facing murder charges who has been on the run for close to 10 years is finally facing the law.Jackson Mwaniki is to remain on remand pending hearing and determination of the case. The High Court sitting in Embu today issued the remand orders against Mwaniki after cancelling his bail terms when he appeared before it.

The former administration police officer was whisked to court by police officers who arrested him after previous efforts by the prosecution to get him failed. Police had claimed they were unable to arrest the accused who had gone underground and kept changing SIM cards and places of work.

It was only after the prosecution applied for the summoning of Eastern Region DCIO Jeremiah Ikiao by the Embu High Court that the accused was apprehended. State prosecutor Leah Mati applied for the summons when High Court judge Lucy Njuguna demanded to know why the murder suspect had not been arrested. When he appeared before the court on Monday, Ikiao told the judge that efforts by his juniors had borne no fruit.He testified that it was only after contacting the Criminal Registration Intelligence Bureau that the accused was traced to Ruai estate in Nairobi where he was arrested two days after the summons.

“The matter was handled by DCI Mbeere North and after the summons, I called for a meeting with the county officers to find out why the accused had not been apprehended for 10 years…The accused person being a former police officer, the officers had done what they could but he was able to avoid their dragnets,”.

He further submitted that the accused was, at one time in 2018, convicted by a court sitting in Nanyuki over malicious damage and released on Sh20,000 cash bail but never attended court and a warrant of arrest was issued.

“I am not convinced by your explanation and therefore your bail terms are cancelled and another counsel will be provided…Mwanik’s charge is “that on January 7, 2015, he killed Joseph Stephen Ireri at Ishiara Market in Mbeere North, Embu County.”

He disappeared after he was put on his defence following submissions by 11 witnesses provided to the prosecution. The person who had paid his bond had been committed to six months’ imprisonment when the accused failed to appear in court.